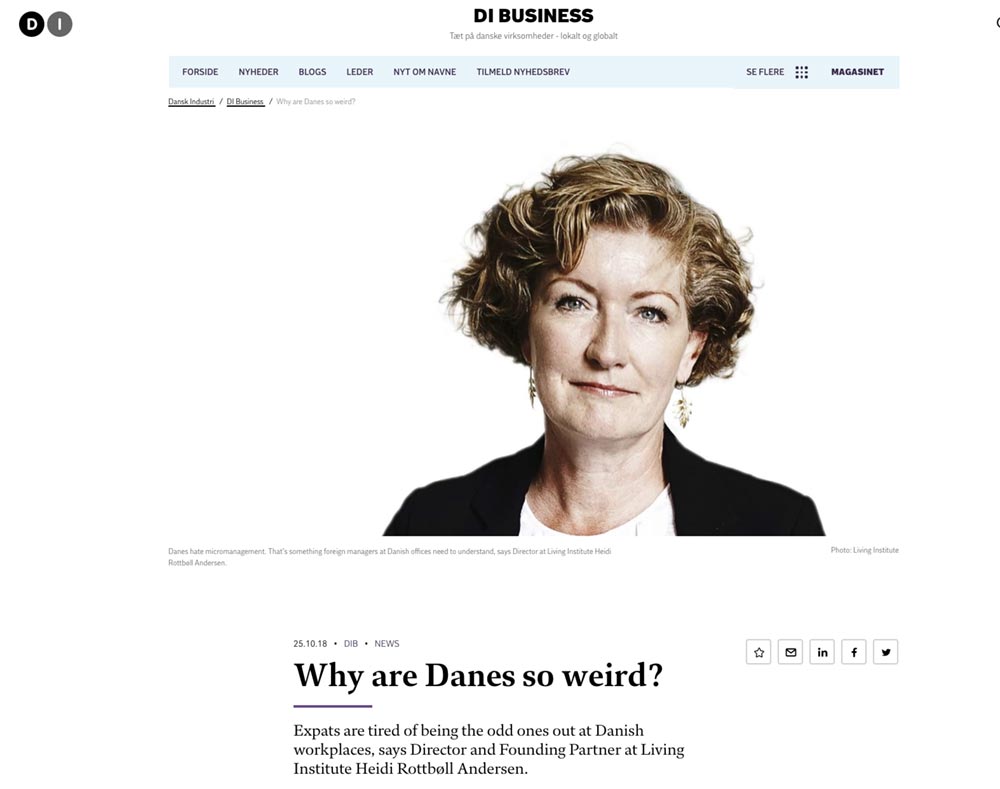 Expats are tired of being the odd ones out at Danish workplaces, says Director and Founding Partner at Living Institute Heidi Rottbøll Andersen.

Even though a majority of Danish respondents in a new survey conducted by Epinion on behalf of the Confederation of Danish Industry (DI) believe that their foreign colleagues have settled in well, that is not necessarily the case, says Founding Partner and Director at Living Institute Heidi Rottbøll Andersen, who has been advising companies about how to make Danish workplace culture, norms and foreign employees to go hand-in-hand since 2004.

“We Danes have certain blind spots.
We think it’s nicer to be here than is actually the case for many foreigners,”
says Heidi Rottbøll Andersen.

According to Heidi Rottbøll Andersen, it is important to recognise that the great degree of employee autonomy and small power distance we have in Denmark are “extreme” cultural traits. She therefore recommends that foreign employees and managers are given a crash course in Danish workplace culture.

Heidi Rottbøll Andersen recounts an American business leader she once counselled who said it was as easy to manage a flock of cats as it was a flock of Danes.

“What Danes consider bad management is micromanagement. This is something foreign managers need to understand. They need to be equipped to handle Danish employees’ autonomy and trust-based management,” she says.

Heidi Rottbøll Andersen does acknowledge that things are moving in the right direction. We have reached a kind of collaboration version 2.0, where there is an increasing acceptance and understanding of being at a workplace with colleagues with another background than oneself.

She wants inclusive culture at the workplace to become a matter of course. This requires that management takes the lead – also in social life.

That opinion is shared by 23% of respondents in DI’s survey. Meanwhile, a whole 41% of respondents believe that the key factor for good integration at the workplace is that colleagues with foreign backgrounds become better at speaking Danish.