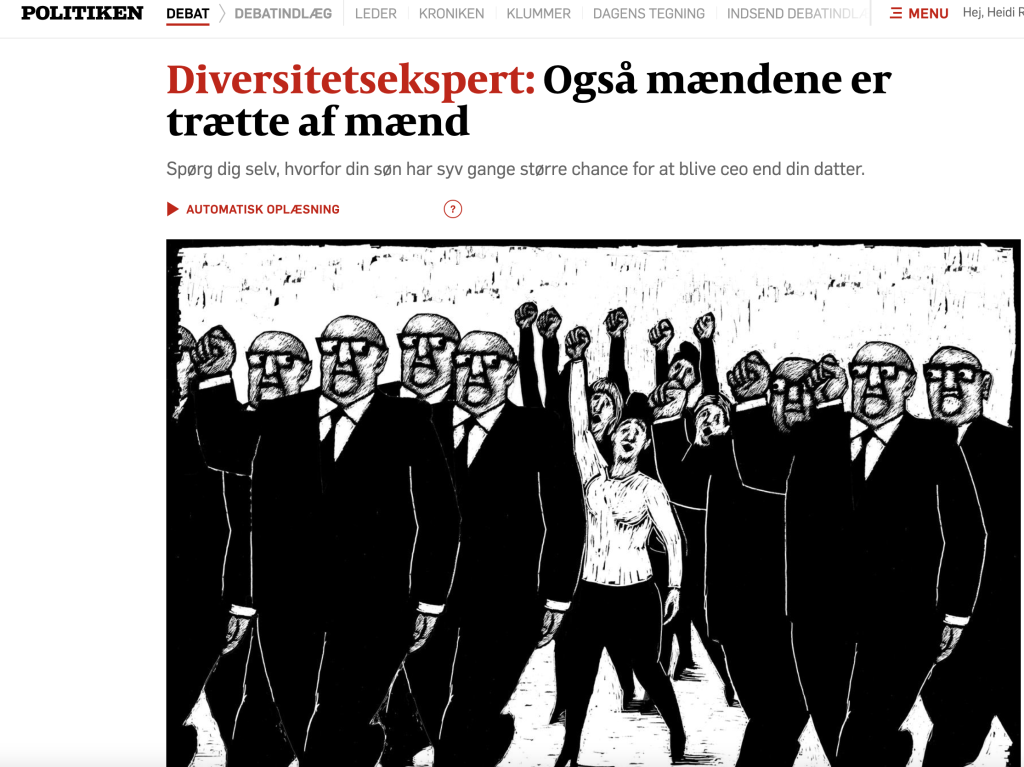 Diversity expert: Even men are tired of men

Ask yourself why your son is seven times more likely to become a CEO than your daughter.

By Heidi R. Andersen, Author and founder of Living Institute

In Living Institute, we continuously carry out research-validated inclusion measurements in several large companies. The surveys show that women are extremely frustrated about the fact that it is virtually impossible to advance to top management level or to obtain a board position.

What is new is that we see a lot of men expressing the same attitude. Especially in the younger generations. In the surveys, more and more men state that they have started looking for workplaces in which there are equal opportunities for all. And where they do not risk sitting side by side only with other men when rising through the ranks. The diversity they see in the lower layers of the organization is what they want to be surrounded by when advancing to higher management levels.

Women are tired and frustrated of fighting to create gender diversity in the workplace. There is no more to come at. They are ready to occupy the top positions, and they have been for a long time.

Instead, we see tremendously good results if mobilizing the men. More and more men do not want to see incompetent men being promoted at the expense of their obviously more competent female colleagues. If you break it down roughly, one in five men is just as passionate about women being considered for the top positions in the workplace as most women are. Three out of five are neutral, and the last fifth do not think the topic is a problem and do not oppose women’s progress in the workplace.

If you mobilize one of the five men who are passionate about establishing gender diversity, it creates a diversity tsunami by which the three neutrals quickly join in; if done correctly, this can make an instant huge difference. The vast majority of men are not against women and men having equal opportunities. They are simply not aware that this is very often not the case – this is what we call privilege blindness.

If you mobilize one of the five men who are passionate about establishing gender diversity, it creates a diversity tsunami

Goldman Sachs is well ahead on the diversity agenda and only lists companies with two minority representatives on the board, one of whom must be a woman.

The task of creating gender diversity in top management is so important that the only right ‘man’ for the task is the company’s CEO. Armed with facts, he must gather 10 men of high standing in the company and, based on data and research, point out that the company has a major business-critical problem. Numerous studies show that a lack of diversity has a negative impact on the bottom line; that problem needs to be solved. The 10 men must then each gather 10 more men and encourage these to help solve the challenge of bringing the female talents to the top positions.

It is important that the men receive professional assistance from experts in the field, so that they do not launch initiatives that may have the opposite effect, such as women’s networks, or introduction of management training for women to ‘bring women up to the level of men’. Women do not lack skills but opportunities that accommodate their skills. Women’s networks and management training do not change the situation, it only creates a greater gap between the sexes.

When conduct workshops, we often ask the participants the following questions:

How many of you have children? Most people have.

How many of you have both boys and girls? Many will have both.

And then we ask those who have both boys and girls:

When you sit at the dinner table with your children, is it then obvious to you why your son should be seven times more likely to become CEO than your daughter? And quite often, they will respond that it should rather be the other way around.

Research has shown that you do not just influence your children, they influence you as well. Male CEOs with daughters give women a higher salary and invest more in CSR initiatives.

And it is quite beautiful that male CEOs around the world can see the world from the perspective of women when they themselves have daughters.